This aircraft represents one of the most legendary planes designed by Soviet Union engineer Andrei N. Tupolev and it was in civilian service for 45 years. It is ranked as fastest aircraft in its middle-size class and also as very reliable plane, suitable for use even in extreme cold Arctic conditions. The TU-154 was equipped with three turbofan engines which powered the plane with cruising speed of nine hundred kilometers per hour for a distance of four thousand kilometers. It has a layout similar to Boing 727, but with slightly wider angle of the sweepback wings. The pilot cabin has been designed for three crew officers and it was equipped with dual control columns. The passengers’ capacity of the plane varies according to its modification. The length of the vessel is fifty meters and the wingspan is thirty eight meters. The tail stabilizer rises eleven meters in height. The TU-154 LZ BTJ aircraft was produced solely to provide flying services to the ex-communistic government of Bulgaria and particularly to its ex-prime minister Todor Jivkov who ruled the party for thirty five years (1954 – 1989). The plane was registered with special status within the fleet of Bulgarian airlines at that time named Balkan Airlines. The abbreviation BTJ states for Balkan Todor Jivkov. 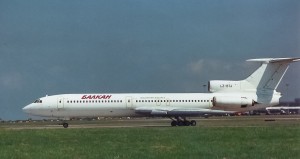 Nowadays this remarkable aircraft has other mission – to grow in artificial reef and to become popular wreck dive site among the world diving community and the initiative of this campaign belongs to a local club named “Black Sea Dive Odessos”. The sinking operation of the plane in Black Sea took place half nautical mile off shore in front of “Saints Konstantin and Helena” Resort, next to Varna city on 25th of May 2011. The aircraft body was positioned heading east and fully intact at twenty two meters of depth with wings resting on flat silt bottom. 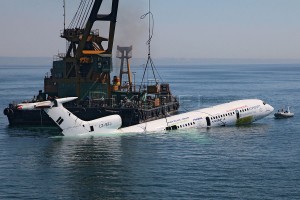 The enclosed environment of the fuselage is suitable for penetration for divers of all levels, but the good buoyancy control is mandatory, because improper diver’s propulsion and finning style may reduce the underwater visibility to zero in matter of seconds. This is one of the very few dive sites in the Bulgarian Black Sea attached to the mooring on the surface and published in the National Maritime Navigational Book. The mooring line is durable enough to hold small sea craft and it leads down to the tail of the plane. This provides logical sequence in the dive site observation. I usually start the tour from the stern exploring the outside of the vessel sheltered from the current until I reach the pilot cabin where I penetrate inside the fuselage heading back to the very last door. Exiting from this point I swim through the empty oval of the one of the side engines descending to the deepest point under the stern and then start ascending up through the tail tunnel which takes me to the anchor point of the mooring line again. The entire dive continues approximately forty minutes in none decompression profile. The underwater conditions even in the middle of the summer season require adequate and personal exposure protection, because the water temperature may be lower than sixteen degrees Celsius. The use of a dive light is mandatory too. I have seen this wreck in its full dimensions underwater only once, because most of the time the visibility is less than five meters. Nonetheless, the dive site’s unique mystical surroundings always trill my feelings and I like it indeed.

However, I think this aircraft TU-154 LZ BTJ should remain on the land in Varna airport, renewed and opened for visitors, because it has been connected to certain historical period of time in Bulgaria and because it was a good sample of the Soviet Union aviation engineering and technology from the past communistic era, but it is just a personal point of view though.

NORTH OF THE CAPE

If you plan to visit the northern Black Sea coast of Bulgaria, then you should know that this countryside has remained somehow in the past and aside from the major touristic resorts of our beautiful country. It does not have big entertaining attractions and modern shopping centers neither well developed public transport and services. On the other hand though, it has wild and well preserved nature. Here is stated one of the oldest National Natural Parks – Kaliakra cape. This place is known as part of the ancient route Via Pontica with significant archeological heritage, but also as very important inhabitant for many wild life species, most of them registered in the World Red Book of Nature. Cape Kaliakra is famous environmental zone among ornithologists worldwide too, because it presents a huge terrestrial shelter for migrating birds. Not at least, the contiguous aquatic territory of the Black Sea is also protected area where almost entire diversity of the Black Sea species may be observed. Although, this continental sea which has only one narrow connection with the Mediterranean basin through Bosphorus Strait, does not classify as well known diving destination, it offers unique diving conditions and underwater environment which may intrigue every scuba diver either beginner or experienced.

Stretching over two and a half kilometers out in the sea, the cape’s walls rise almost seventy meters vertical above the sea level forming the wide curve of the Bay of Birds which extends toward the lower cliffs of “Yailata” area (another natural preserve) further north, until it gently slopes down to the dunes of Shabla Lighthouse – the most ancient, but still functioning navigational beacon not only in the Black Sea, but in the entire Mediterranean region even. On a first sight, these breath-taking coastal cliffs may bring a false impression to the observer that deep sea waters are hiding beneath the sea surface next to those. Actually, it is in opposite, the belaying underwater reefs are very shallow in less than ten meters of depth. The bottom topography is various with huge rocks fell of the cliffs with the time due erosion and many swim-through passages formed from the serge motion. On some particular dive sites even partially flooded caves may be explored underwater. These enclosed and shallow aquatic environments have been occupied from the Monk seal – specie not existing anymore in Black Sea, unfortunately. The dive sites in the immediate vicinity of cape Kaliakra are approachable only by boat and require governmental permission for entry in protected wildlife zone. The other diving locations further north are more or less accessible from the shore, but underwater guidance of well experienced local divemaster is highly recommended, because the proper water entry/exit points to those multiple dive sites are very limited and may require specific safety procedures to be followed. The sea life of the Black Sea is unique and I really mean it. However, one thing is for sure, that if you expect to see a lot of different and colorful fish swimming in blue pool-like water surroundings, you will be definitely disappointed. Actually, many of the local species are pretty good masters of the camouflage. They easily merge themselves on the spots and you need to be very familiar with them or someone else has to point these out for you. On the other hand, with one or two exceptions, most of the habitants are not shy, thus any well-equipped and dedicated underwater photographer may get some astonishing macro shots. In the coastal waters north of cape Kaliakra you may observe steady population of seahorses, but mainly in June when the water temperate is still moderate. Later in the season these gorgeous species appear occasionally. Another quite attractive creature that pertains to this local Black Sea underwater environment is an amphibious harmless type of snake which preys in the water, but takes its catch outside in open air to swallow it. On your dive, if you get around in the right moment and if you are patient enough you may witness how quickly this snake could be while hunting. I have seen this remarkable episodes number of times during my dives. Other spectacular specie is the local black cormorant. The bird inhabits the caves formed in the cliffs and during daylight time it may be observed on the rocks in the sea with wings widely opened against the wind. In September, when the autumn fish migration starts, the cormorant becomes very active, performing hundred dives per day for feed. At this time of the season, our small groups of divers may become directly observed underwater from the birds two or three times on a single dive occasionally. As I mentioned earlier, the bottom topography of all dive sites is variable and very interesting, but it may challenge the navigational skills even on experienced divers. The underwater visibility ranges significantly and changes frequently. During most of the summer season it is in between eight to ten meters in shore, but depending on the wind direction mainly, it may drop down to less than three meters in twenty four hours period of time. The water temperature also ranges even during the hot months of the year and the thermoclines are not rare, including in shallow water areas. Proper sea conditions assessment and adequate exposure protection are required to have a pleasant and enjoyable dive. The average water temperature in July till middle of September is twenty degree Celsius to the depth of ten meters. In the month of June it tends to be slightly lower. The highest period for the blossom of the phytoplankton is in the second half of August when is the pick of the water temperature which may exceed twenty five degrees Celsius. At that time some of the species migrate to deeper and cooler water environment, mostly bottom habitants.

The well-known remains of Black Sea shipwrecks, accessible for shore diving north of cape Kaliakra, are few and not adequately protected from the marine authorities. These dive sites are vulnerable to the attacks of local metal scrap seekers. Their awful acts of vandalism continue despite our efforts to stop them. Fortunately, off shore deep water shipwrecks are safe and intact. Most of those are resting deeper than forty five meters of sea water and require extended range of diving procedures to be explored.